BE POSITIVE DOLPHINS FANS, THE FUTURE IS BRIGHT!

It might not feel like it now, but the Miami Dolphins had a hell of a season in 2020. Coming off a surprisingly promising 5-11 season, this team cemented themselves as one of the brightest young teams in the NFL by going 10-6. Yet, most of us are probably feeling torn this week, the manner in which the team bowed out of the playoff race wasn’t great at all, and despite the final record, it’s that defeat that will carry us into the off-season.

But once you’ve had a chance to step back and process Sunday’s result, and the accompanying performance, there are plenty of reasons to be positive.

It’s not very often that a team goes from 5 wins in one season, to 10 wins in the next. Some solid additions in free agency meant that the Fins promising defense graduated to one of the best units in the league.

The additions of Kyle Van Noy, Shaq Lawson, Emanuel Ogbah, Zach Sieler and Elandon Roberts provided a pass rush that genuinely gave teams trouble. The continued growth of Jerome Baker and Andrew Van Ginkel was a bright point throughout the season, with both Linebackers having individual standout games. Nik Needham’s versatility and the all out work ethic of rookie Safety, Brandon Jones, provided a boost to an already excellent secondary. And finally, the addition of Raekwon Davis in the draft looks like it could pay off, with the Alabama graduate looking like a fine anchor on that defensive line.

Offensively, there is clearly a lot of room for growth, but we need to acknowledge the emergence of Myles Gaskin as a solid NFL back. In his second year in the league, Gaskin played 10 games, rushing for 584 yards and adding another 388 through the air, a combined total of 972 yards, if he’d played all 16 games that would have put him on track for 1555 total yards. Not bad for a 7th round pick.

The pre-season trade for Lynn Bowden also looks like it will provide the Fins with a versatile offensive weapon for the next few years. A stat line of 28 receptions for 211 yards is never going to set the world on fire, but when you register that this was an average of 7.5 yards per reception and included 13 first downs, it’s clear that Bowden has a future as the Fins short yardage specialist, moving the chains and acting as a safety blanket for Tua.

It’s going to be a toxic couple of months on Twitter around the Dolphins’ QB position. It really shouldn’t be. The Dolphins got their guy in the 2020 draft, having had their eye on him for two years in College, Tua Tagovailoa fell into their hands with the fifth overall pick. The Alabama prospect promised efficient, accurate Quarterback play, with a tonne of poise in the pocket and a leader’s mentality on and off the field. And guess what? Nothing has changed in his rookie season, he’s still an NFL calibre Quarterback.

Let’s be clear though, in the coming months we’re going to hear all sorts of rumours from the Dolphins about the draft, and some of those will be ‘the Dolphins are checking out X QB’. There is nothing wrong with this because, A) the front office loves playing the master of deceit role and, B) it would be irresponsible if the Fins don’t do their homework on every top player in the draft. If they come out and immediately say ‘Tua is the guy, come and get our pick’, the value that they get from any potential trade partner is going to be reduced.

But make no mistake, this team won’t move on from Tua. Let’s not forget that for the majority of games this year he has thrown to two players that would start at skill positions for other teams in the NFL, Devante Parker & Mike Gesicki. Both of these players have missed games and have played whilst banged up. Let’s not forget that the rookie has been playing behind one of the statistically worst offensive lines in the league (29th overall) and has taken 20 sacks in 10 games. And let’s not forget that he had a ridiculously short off season and came back from a very serious injury.

Sure, Tua’s doubters will say those are all excuses, and maybe they are. But to the objective fan, it’s as clear as day that the Dolphins haven’t had a real chance to evaluate their QB yet. If the team goes out and adds playmakers in the offseason (which they simply have to), as well as some additional offensive line support, and we’re STILL having this conversation next year, then yes we can talk about the future. Until then, Tua is the guy and all the sniping is counter-productive.

18 interceptions. The best Cornerback tandem in the league. Young complimentary pieces. What’s not to like about the Fins secondary? Prior to the Buffalo game, the Fins defense had allowed the fewest points in the league, an incredible turnaround when you consider they conceded the most points in the 2019 season. That improvement is largely down to Josh Boyer’s secondary, with Byron Jones proving an inspired acquisition, and Xavien Howard finally garnering the attention he deserves from the rest of the league.

There was lots of finger pointing after the Buffalo game, and rightly so, but it was a collectively poor performance all round from Miami. The offense’s lack of ability to move the ball, and the special teams breakdowns all put pressure on a defense which has soaked up most of what has been thrown at it all season. It’s clear that this secondary is up there with the best in the league, and if we’ve learned anything from Brian Flores’ tenure so far, we should expect the team to add further elite pieces in the off-season (eyes on Marcus Maye, Keanu Neal & Justin Simmons!).

If we need any evidence to convince us that the current front office knows what it’s doing, it’s the Laremy Tunsil trade. Having the third overall pick offers so many options for the Dolphins in the draft. They could take an elite Wide Receiver, bolster the Offensive Line with the best OT in the draft, add one of the best Linebacker prospects we’ve seen in recent years, or pick up a huge haul to trade back with a QB desperate team.

But it’s not just the third pick we should be excited about. The Dolphins also pick at 18, 36 & 50, giving the team the chance to add some more premier talent. If it’s playmakers you’re after, the second round of the draft is traditionally RB territory, then you only have to look at the likes of Courtland Sutton, DK Metcalf, Tee Higgins, Deebo Samuel & AJ Brown to know that you can pick up a very good receiver as well.

You’ve got to think that, as above, Flores and Grier want to give Tua as many weapons as possible this year, and by doing so it is entirely possible that this Miami team can go one better next year and make a run in the playoffs.

Agree, disagree or simply want to get involved in the debate? Give us a follow at @DolFanUK_Pod. 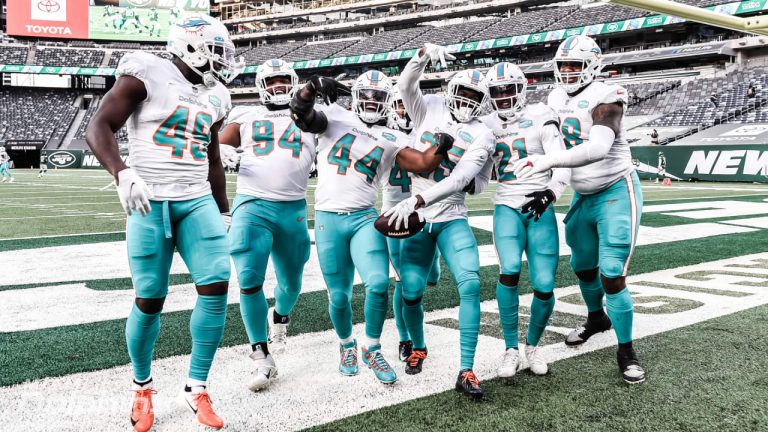